Production Planning and Control: Understand the importance of PCP for the company’s financial health

The process of modernization of the management of production systems, as well as the advancement of economic globalization and scientific and technological innovation, has forced companies, for reasons of survival in the market, to seek alternatives that lead to obtaining gains in productivity. The market imposes two alternatives: either improve their planning or close their doors. And it is precisely about production planning and control that we will talk about in this article. Good reading!

In the beginning, the industry had large profit margins. With increased competition, that’s over. Before, process losses and production stoppages due to planning failure were diluted in the large profit margin and went unnoticed.

Stops of two hours or more on a production line for lack of material were common. In general, in micro and small companies, there was no production planning: the owner together with the person in charge of production, when they arrived at the company in the morning, took a look at the orders and, by an undocumented production order, started production of the day.

This lack of planning caused production stoppages, a lot of wasted time and material. Material losses were very frequent in preparation stages, such as cutting, for example.

The lack of a documented production order meant that parts were cut wrongly and many literally lost because they had not ordered that product.

It worked more or less like this: “just cut it and then we can fit a request”. It happened that this order did not happen and parts in intermediate stock were stopped. 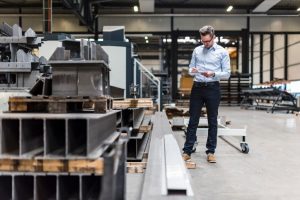 Time passed, profit margins in the industry shrank dramatically and it was no longer possible to work that way. Obligatorily, companies had to plan.

With this came the Production Planning and Control – PCP, a management method that seeks to program, control and improve the use of material resources and people’s time in production. Reducing the occurrence of rework, one of the main villains of low industrial productivity in Brazil.

With good planning, it is possible to make decisions assertively. With this method, production activities are planned from a process flow that starts with the receipt of the customer’s order until the delivery of the product prepared in advance with a time forecast of week, fortnight and month, depending on the existence of an order in the backlog .

In this way, the supply of materials, the balancing of production and the order delivery time will be fulfilled. The old practice of starting the day’s production by looking at orders is no longer allowed.

MPC is sometimes still seen as an isolated sector, but it is of great importance to the entire company. Being well executed, it helps to reduce waste, optimize resources and deliver the order within the agreed deadline, directly impacting the company’s finances, as there will be no delays in cash flow entries.

Over time, the occurrence of lack of planning as a bad thing for companies was treated as an event of the past. Unfortunately, many companies are still unaware of this and continue to lose a lot of money due to the lack of a production planning and control system. These days, this kind of attitude (or lack of it) can lead a company to ruin, even if slowly.