Polyethylene Film: Discover How It Is Made

It is quite common in our daily lives to use various types of products and not know how they are made. For example, polyethylene or polyester film is one such product.

In fact, most of us don’t even care about that kind of information. It just needs to be manufactured and available for us to use!

But if you are not part of that majority and like to know how things are done, keep reading this article to find out how the polyethylene film is made!

Before we talk about how polyethylene film is made, let’s first understand what it is for. Where it is used.

Polyethylene is a plastic. In fact, a thermoplastic, that is, it can be fused to a liquid and reformed, returning to the solid state.

It is chemically synthesized from ethylene, a compound that is usually made from oil or natural gas.

Polyethylene is one of the most used plastics today.

In the case of polyethylene, the melting and deformation temperature is between 110 and 115 ° C.

Polyethylene, in its various forms, has unique properties, such as impact resistance, high flexibility, good workability and thermal and chemical stability.

Polyethylene is used for the manufacture of packaging such as plastic bags, plastic films, geomembranes, bottles, etc. 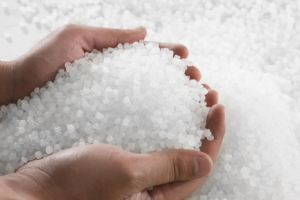 Ethylene is one of the elements used in manufacturing. It is a gas that reaches its liquid state at -104 ° C.

Ethylene undergoes the polymerization process. That is, it is transformed into polymers, which are small particles, similar to grains. Hence comes polyethylene.

The manufacture of polyethylene film 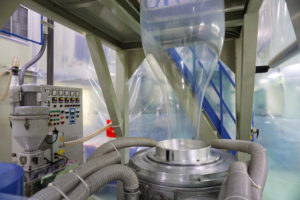 The process of making polyethylene film is called extrusion.

This plastic film manufacturing process begins with the melting of small plastic granules (called resin), until they become fused and malleable.

The molten plastic is pushed, or better said, “extruded” through a circular matrix to form a continuous plastic tube called a bubble.

The bubble is inflated with air to the desired diameter and pulled vertically upwards from a tower, allowing time to cool before being flattened to its flat width.

The color of the film can be changed in the melting process by adding resin granules that contain colored pigment.

Many things can be done during this process. A printer may be printing images, instructions, notices or company logos on the polyethylene film.

The film can be cut and separated for individually cut bags. Ventilation holes can also be added.

The polyethylene film manufacturing process has some additional processing limitations.

If the film requires further technical changes, the laminated film will be removed from the extrusion line to be further modified in what is known as offline conversion.

So, did you like to know how the polyethylene film is produced? If so, share this article on your social networks and stay tuned to our blog, as we are always posting new articles here.

If you need to purchase polyethylene films, whatever their use, please contact us right now.

We only work with high quality products to better serve our customers. It will be a pleasure for us to negotiate with you!